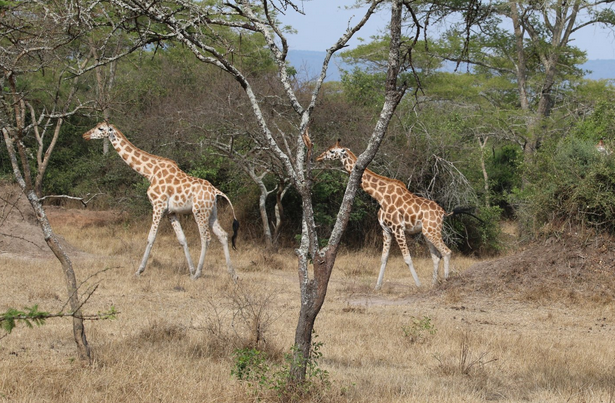 Largely covered by savannah grassland and seasonal wetlands along the rift valley escarpments. Bugungu reserve is a home to diverse species of wildlife.

What to do when you visit Bugungu wildlife Reserve There are several exciting activities to do in Bugungu wildlife reserve and the commonest activity done is game viewing. Bugungu reserve is a home to a number of wildlife species most of which can also be found in Murchison falls national park too. Some of the popular animals include; Uganda Kobs, the bush and waterbucks, elands, reedbucks and sometimes lions and leopards.  Herds of elephants and giraffes migrate from Murchison to Bugungu reserve to graze on the fresh grass.  In addition, Bugungu is one of the few places where you can spot the rare sitatungas.

There are also a few primates species living in this reserve. Some of them live in the reserve’s forested areas and nearby forests like Budongo forest.

Bugungu reserve is home to over  200 different bird species. Hence a great place to include on your Uganda Bird watching safari.  You will need a bird watching specialists guide to guide through Bugungu in search for the different Avian species. All you will need are you hiking gears, cameras, binoculars and then hope for the best day of birding. Someof the bird species to watch out for include; swamp flycatchers, double toothed barbet and  speckle breasted woodpeckers. Other birds to watch our for are; the saddled billed stork, the black headed gonolek, the Abyssinian and black belled bustards. The Shoebill stock can also be spotted in the swamp areas of Bugungu.

Nature walks are a perfect way to meet local communities. Whilst visiting Bugungu wildlife reserve we recommend that you take a nature walk to close by communities. Community walks is also another way of supporting these communities. In the due course, you learn about their cultures and also contribute to the conservation of these reserves.

When to visit Bugungu reserve

Like all other tourism destinations in Uganda especially those up country, the best time to visit is during the dry season when the roads are quite passable. The dry season starts in June up to September and then later from December until February. Other months of the year are wet.  Hence, making it difficult to get to your destinations easily at times. This however doesn’t mean the reserve  closed off. The reserve is open all year round.

There are no hotels and lodges within the reserve. Therefore, you will have to use the lodges with Murchison falls park when you visit Bugungu wildlife reserve.

In conclusion, if you have been to most of the National parks and are looking for something unique Bugungu wildlife reserve would be perfect.