Karuma reserve is an ever green conservation area with various water courses on the south of the Victoria Nile. It is largely surrounded savanna grassland kind of vegetation especially the elephant grass. There are some isolated forests here and there composed of Savanna trees which represent remnants of former forest covers. 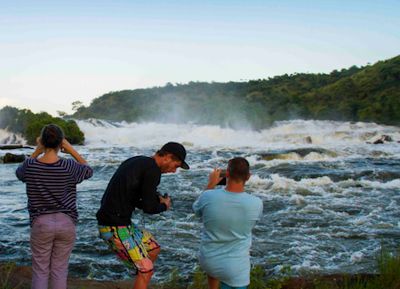 Karuma is a home to so many different Savannah wildlife species. Most of these are the same animals that you will find in Murchison falls National Park. To meet all these animals, you need to go for a guided nature walk and game drives. The reserve is blessed with herds of elephants, Kobs, giraffes and buffaloes and so much more..  Hippos are also often seen closer to the water sources since they are aquatic animals. Lions and leopards are rare but can also be spotted once in a while. Most notably is that some of these animals cross over from Murchison falls national park.

There are also a few primate species living in the small forested areas of the wildlife reserve and these include; the black and white colobus monkeys, the vervet and L’hoest monkeys, and olive baboons.

Bird watcher will be amazed to learn that this reserve is a home to hundreds of bird species . These species mostly inhabit the forested areas of the reserve.  A walk around Karuma reserve will give one an opportunity to meet so many bird species. If you’re a keen  birder, you might be able to see over 300 species. Which is like half of the number of species found in this area. Birds cross over from Murchison Park and Budongo forest which is why you will find similar bird species as those found in those neighboring wildlife conservation parks.

Put the wildlife and birds aside, the falls, from which the reserve derives it’s name are among the highlights of Karuma wildlife reserve. Many people including just passersby will stop to observe and take pictures of the falls. There are different stories that explain the existence of these falls. Locals believe that the rocks over which the waterfalls form were put in place by Karuma. Karuma was a traditional spirit  and thus the name Karuma falls. These falls provide such a beautiful view especially during the rainy season when there is a lot more water. The falls form a foam like nature and appear white like snow as it falls down the rocks.

Visiting the local community is one of the activity that is a must. More so,  since Kiryandongo is home to a number of refugee camps. You can opt to visit this community and learn more how they survive and live in the camps.  Uganda has  the most welcoming people, in the world and this further explains why it has the largest numbers of refugees in the world.

Other communities close by that can be visit include Gulu town which was the former rebel city. Mostly to learn more about how this city is developing after almost 20 years of war.

When to visit, how to access and where to sleep in Karuma wildlife reserve.

Karuma wildlife reserve can be visited anytime of the year from January to December, However, most people prefer during the dryer months of the year which are between June and September.

The reserve can be easily access by road using the Gulu highway. AA Safaris and Tours ltd can provide transportation for you to visit the site and also Public transportation is available.

Unlike most of the other wildlife reserve, Karuma has a campsite where you can stay. This therefore allows one enough time to explore the reserve. One can also opt to stay in Murchison falls national park at Red chillie camp or Sambiya river lodge.

In conclusion, Karuma is one of the most missed opportunities whilst on a Uganda safari.