Kyambura wildlife reserve- your go to reserve for primates in Uganda. 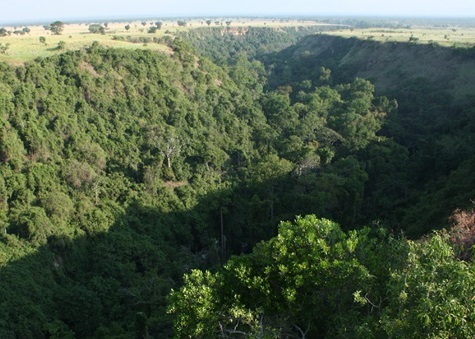 The reserve is mainly covered by the Savannah kind of vegetation and it is a great source of water to so many animals that live in the reserve and across Queen Elizabeth Park. The reserves gentle rolling landscape and thick forests plus a running river provide the perfect habitat for the primates.

What you expect when you visit Kyambura wildlife reserve

Most certainly, what you should expect to find in Kyambura reserve are the various primates species especially when you walk into the Kyambura gorge.  Primate watching is the one of the activities that you must do when you visit this reserve. Kyambura wildlife reserve is the only place in this reserve and the whole of Queen Elizabeth Park where you get to meet the habituated chimpanzees.

Other than the chimpanzees, there are so many other primates that you will see while walking through that gorge. There are species like black and white colobus monkeys, so many vervet monkeys, red tailed monkeys, l’hoests and many more others.

Other than primates, there are also other animals that live both in the reserves and all across Queen Elizabeth Park. Most of the animals found in the reserve are also found in  Queen Elizabeth.  For example; the elephants, buffaloes, different types of antelopes, lions, leopards, hippos, Uganda Kobs, warthogs and so many other mammals.

The existence of the Kyambura gorge gives Kyambura reserve the opportunity to make it to the list of the best places to visit for birding watching safaris. Although the forest in the gorge is a home to so many bird species, bird watching can also be done in the open grasslands and thickets out of the forest. Some of the species to look out for include;  the blue- headed bee eater, lots of falcons, African finfoot, among others. More so, are the lesser flamingos, white tailed lark, corn crackers and so many other species. A keen bird watcher can certainly view more than 100 different bird species with the help of a birding guide.

Where to stay when visiting Kyambura wildlife reserve ?

There is plenty of accommodation facilities that surround this reserve and they serve Queen Elizabeth Park at the same time. There are quiet a number of lodges and hotels that someone can stay at whilst visiting Kyambura wildlife reserve. Some of the lodges close to Kyambura are Mazike Lodge, Kyambura gorge lodge and so many more.

This reserve together with Queen Elizabeth park have for a long time proved that they are worth all the time and money spent when one plans such a trip. The only threat to its survival is probably human encroachment. Human activities threaten the existence of primates especially once the forest is destroyed where they live and find food.

When to visit this Kyambura reserve?

A visit to Kyambura wildlife reserve  is possible any time of the year since all activities run all year through.  Therefore it is possible to  see all the wildlife, primates, birds and other attractions anytime of the year. Kyambura wildlife reserve can only be accessed by road but during the rainy seasons some roads are impassable. Hence, the reason as to why we recommend you visit during the drier months fo the year.