Uganda now has got about 17 different habituated gorilla groups that you can choose from to track if you are planning a gorilla safari in Uganda. You can choose to go for gorilla tracking or gorilla habituation experience.  Both gorilla tracking and gorilla habituation experience is done in Bwindi Impenetrable National Park.  There are 17 gorilla families and Mgahinga national park where on tracking is done, there is only 1 habituate gorilla family.   With 17 different families available for trekking this confirm that Uganda has 136 gorilla trekking permits available per day. In Bwindi, these families that are open for gorilla trekking safaris are found in 3 different sections of the park and these include; 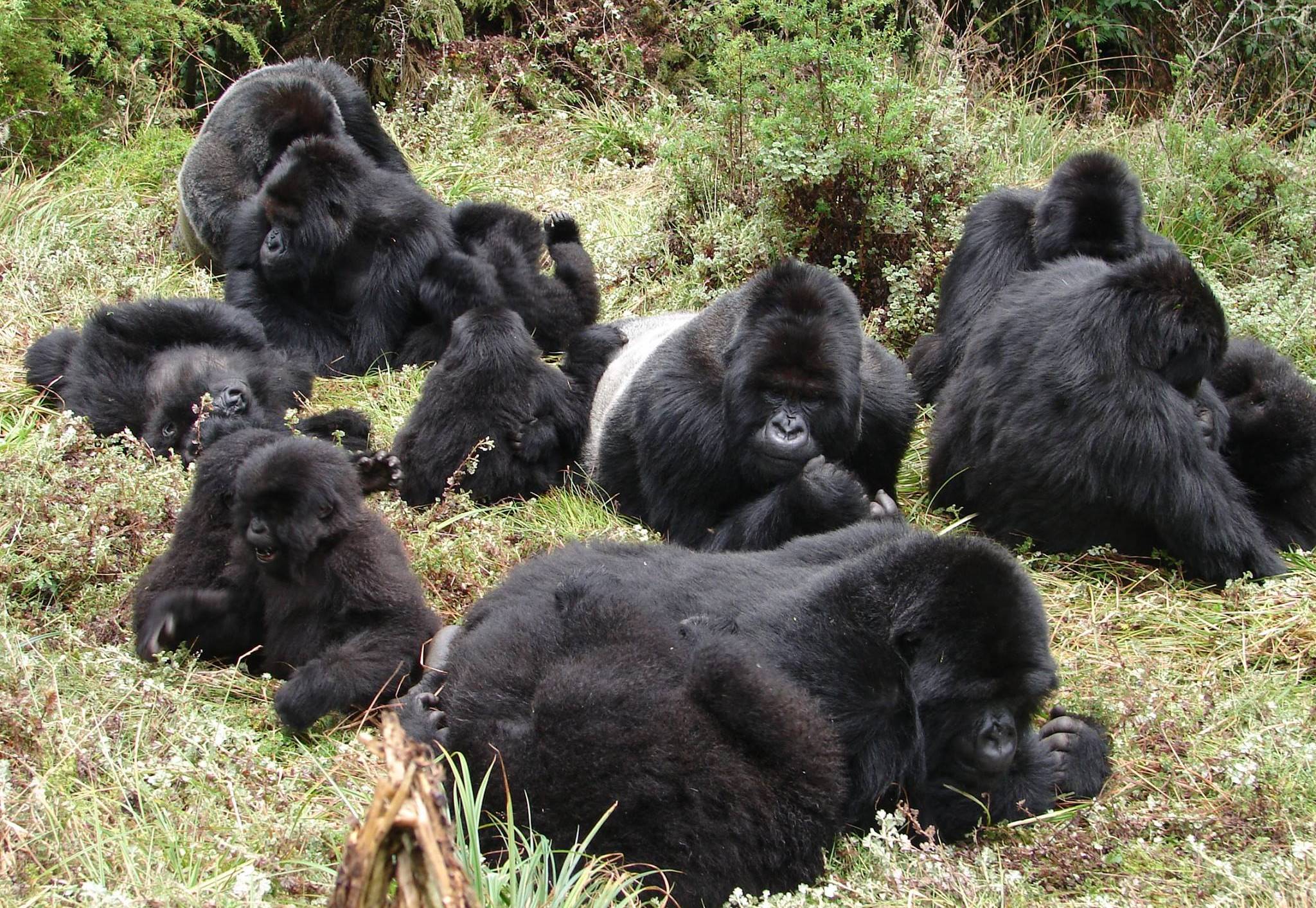 This is one the very first section of park to be opened to tourism business and it has 3 families.  Until today, it is still the most preferred Sector. It is a little more developed compared to other sectors with some hospitals for the communities.  There are schools and other that gorilla tracking, there are other activities that you can engage for example village/ community  walks, mountain biking, visit the Batwas for a cultural experience, among others.  You can choose to do any of those activities after the gorilla trek since the trek is often shorter.  Mainly because groups don’t wonder off very deep into the jungle.  Gorilla families found in Buhoma include;

This group is one of the very first that were created and it was such a large group of about  25 members back in the days and the members include a number  of strong male gorillas. This group was found living near a swamp in Bwindi and this is how it got its name Habinyanja that comes from a local word “Nyanja” that means a lake.

Later in 2002, this group was divided into 2 to create Rushegura family living the groups with about 17members only that included 1 alpha male, one black back male and 5 adult females; there is a lso1 sub-adult, and 3 juveniles as well as 6 infants.

It is however important to note that these figures are not fixed because gorillas do die, new now ones are born in every group and sometimes they move from one group to another leading to an increase or decrease in numbers.

Mubare is the oldest group, it was the very first habituated family created. It is known to have had only one leader for a long time because all leaders could not tolerate multi leadership in groups. The very first leader called Ruhondeza was known for his brutality and killed so many young males in an effort to eliminate competition.    When he died in 2012, the group had only one male called Kanyonyi and he became the next alpha of the group. This group has 11 members that include the alpha male; there are 6 adult females and about 3 infants as well as 1 sub-adult. This is the mother of all gorilla tracking safaris in Uganda.

Rushegura was created after splitting Habinyanja into 2 groups in 2002. The name was adopted from a tree species called ‘Ebishegura’ commonly seen in the area where the 2 groups split from.  Rushegura is an easy group to track because they often feed from areas very closer to the park headquarter of Buhoma, they are oftenly seen wondering around people’s farms and around the lodges in Buhoma.  This family has got 16 members and these include; 1 silverback called Kabukojo, 4 black back males, there are 4 adult females and 3 juveniles as well as 4 infants.

Katwe grup has been under habituation for the past three years and has just been opened up for gorilla trekking in August 2018. Due to the demand and also the fact that the groillas are now used to the presence of Humans, the gorilla family is now available for trekking. You can book the gorilla permits for katwe group through

Ruhija is the closest to Buhoma sector, it is not as developed as Buhoma is but it is promising. One can spend a night in Buhoma especially for the luxury travelers since there are not that many high end accommodation facility at the moment in Ruhija and then drive to there in the morning to track. Ruhija has got 3 families as well and they include.

This family has got some of the fastest learns among other gorilla groups. It  took just about 15 months o habituated Bitukura  in 2006 and yet others took about 2 years  to get them ready to receive visitors and this was amazing. Unlike in many other groups where members fight a lot, gorillas in Bitukura get along fine thus the reason there is always peace and harmony with this group that is led by Ndahura alongside other silverbacks. The entire group is made of 13 members including the 4 silverbacks and 4 adult females; there are 2 juveniles and also 3 infants.  This is one of the most peaceful families in this jungle, the males have a high level of tolerance to an extent that sometimes that group has about adult males but they never fight for leadership.

Kyaguliro is also an old group, it has a history and it was habituated but not for purposes of tourism but rather research therefore there were no permits issued to tourists for that group.  The group was originally led by an alpha called Rukina but he was struck dead by lightening and after his death in 2015, inexperience Mukiza to over leadership.  The group under Mukiza was ambushed by Rukara an immigrant silverback from Bitukura, created a chaotic situation in the group and later leading to a split into Kyaguliro A led by Rukara & B led by Mukiza . Despite the split, these 2 families continue to live close to one another and feed from within the same location. The whole group is compsed of 20 members which  include 1 alpha Rukara, 2 black backs, there 3 adult females and  2 juveniles as well as  2 infants in group A and group be led by  Mukiza includes 1 alpha, 4 adult female gorillas and  1 sub-adult as well as 4 infants making it 10 members per group.

There is also Oruzogo family which is composed of 17 members and these include 2 different silverbacks, there are also 2 black back males, 5 adult females and 2 sub-adults, there is also 1 juvenile as well as 5 young ones. This group is led by Bakwate, they have become more popular to tourists because of their playful nature especially the juveniles and the infants. This group got its name from a plant locally called Oruzugo which is commonly in the areas where this groups feeds from.

Lately Rushaga is the best section of Bwindi simply because it can be easily accessed from Rwanda compared to say Buhoma and Ruhija. therefore making it the best sector for gorilla tracking safaris that start from Kigali. In this sector, there are 5 different gorilla groups available for tracking or for a gorilla safari  and they include;

This was one of the largest habituated gorilla group with  about  32 members at the time of its formation and the group included several males that later there were male rivalry within the group  that led to dispersal. Later the group was split into 2 families creating Mishaya family and again later it was subdivided to create ‘Bweza’ family. This family ended up with only 7 members that include just  1 alpha male called Bweza, 3 adult females, with 1 sub-adult and also 1 juvenile  as well as 1 infant.

Mishaya was formed after Nshongi split into 2 groups leaving Nshongi on its own in 2010 and then Mishaya got it own leader. Unfortunately, later in 2014 Mishaya’s Silverback the one that had led it from the very beginning died after suffering from an obstruction of his intestinal gut and following his death, the group again dispersed because they had no alpha to lead the group. Some members joined Bweza family and other became part of Bikingi family.

Later when the group got an alpha called Mishaya who is a fighter, he brought along 10 members from his original family and has since the continued engaging in various fights with different gorilla families. Today, a once dismantled group has 12 members with just 1 dominant male.

Bweza family also has got 12 members. It was initially part of the larger Nshongi family back when it had just been habituated but when it detached, it formed its group under Kakono as the dominant male. This family prefers to forage from around   local community land where the vegetation is a bit disturbed than going deep in the forest where vegetation is intact. Bweza family is composed of 2 silverbacks; there are 4 black back males, 3 adult females and 1 sub-adult as well as 2 infant.

Kahungye was habituated in 2008  with originally 29 members. Because of having 3 grown up alpha males, the group was affected by  continuous intra-male rivalry. Thus they ended up splitting into 2 in 2012. Therefore  creating  Busingye family. From 29 members, today Kahungye gorilla family has about 17 members only.  It has 3  silverbacks with  a leader called Rumanzi. The group also has 3 black back males, 3 adult females and  3 sub-adult, there are  3 juveniles and also 2 infants.

The Busingye gorilla family was part of Kahungye family. They later split into 2 creating Busingye, each got its own alpha. Name after the alpha male Busingye, the group if composed on 9 members. This includes  1 alpha,  3 adult females, there is 1 juvenile and  also 4 infants.

This family usually foraging within Bwindi forest’s deeper areas and they rarely comes out and seen around the edges of the park.

This group was formed in 2012 following the continuous dispersing of Mishaya family members. Several members from Mishaya were relocated to this group, and they were joined by wildlife members. Later the group was set for habituation as they keep an eye on those that were already habituated.  This family is used by people that solely want to experience a gorilla habituation exercise.

Because the group is still under habituation exercise, there is no alpha Male. Currently, the gorilla group has a total of 15 members. These include ;  1 silverback and 5 adult females, there are 2 sub-adults and 2 juveniles as well as 5 infants.

This family was formed after some members dispersed from Nkuringo family. One of those Silverbacks that formerly belonged to Nkuringo family called SB ‘Bahati’ dispersed. And it started its family. Some members had come from Nkuringo while others were non-habituated gorillas. After all members were habituated, the family was named ‘Bushaho’ adopting the name from the place where they often forage.  The group has 8 members with Bahati as the dominant male. It also has 1 black back male, 3 adult females and 1 sub-adult, 1 infant as well as 1juvenile.

This is on one the latests additions to the gorilla tracking groups.  In 2018 August the group was opened up for gorilla tracking safaris. The group has over nine individuals and is located in the southern sector of Bwindi.

It is composed of 10 members and led by an alpha called Mark. The other members include 4 other silverbacks and 2 adult females; there are also 2 juveniles and just 1 infant. Although it was habituated in 1991, the group became open for tourism in 1994. . These family members are very much known for their trans-boundary behavior. Meaning they wonder off in to Rwanda and sometimes into Congo although; recent the government of Uganda has managed to contain them by setting up barriers to prevent them from crossing over.  Just like Bitukura in Bwindi, these gorillas are very tolerant thus the reason 5 silverbacks can live in one family.

Mgahinga has other gorilla families, which can be booked on the site. This is because these families are always on the move and sometimes they cross over to DR.Congo. That is why they can-not be booked inn advance but just a month to the trekking date.

Gorillas are always on the move, and therefore, deciding on which gorilla family to trek is tricky. Most noteworthy, it is  dependant on first o all availability of the gorilla permit but most important your physical ability. A client can choose a region they wish to trek in, may be depending on the accommodation facility they prefer. However the decision ton which family to trek is highly dependant on the park warden. If you wish to do a gorilla safari tracking a gorilla family that is less strenuous then we recommend you